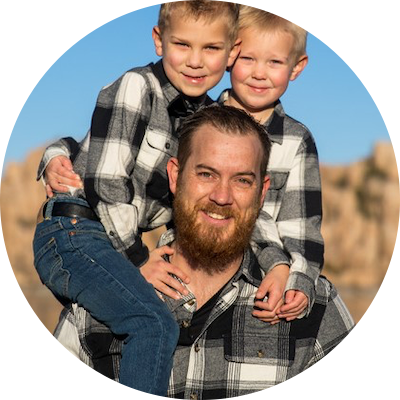 McKray's had an adventurous life so far and has had the benefit of experiencing a great deal of pain and adversity early in life. He endured a severely traumatic childhood and adolescent age before finding his first real community in performance art in high school. He excelled in trombone performance and used those skills to join the United States Marine Corps Band as a trombonist.

Following his four-year career in the Marines, McKray studied Aerospace Engineering at Embry-Riddle Aeronautical University with the intention becoming a military test pilot. His first engineering job was with the US Navy as a Flight Test Engineer for F/A-18 aircraft and solid-fuel missile engines. From that position, he was selected for the US Navy pilot training program but turned down the dream-opportunity in favor of living a more family-friendly life as an engineer.

His next position took him to the Boston area where he has been since 2017. His sons, Sterling and Findlay, while both born in Mission Viejo, CA, identify Lowell, MA as their home. At his fourth job since moving, McKray found an organization with which he intends to stay for the foreseeable future. He helps develops robotic vehicles with Robotic Research, based in Clarksburg, MD.

McKray began his peace-finding journey in the summer of 2021 where he discovered that he had been living a decade of his life as a projection of himself, created by the expectations someone else. On a path guided mostly by meditations of Stoicism and with support from his family community and mental health professionals, McKray discovered he was ready to begin his new life and be his bad self. Trigger Warning: There is some discussion about suicidal ideation in this episode from marker 26:07 to 32:38 Join Kimber as she t…